Read and buy our books online

Read Online  Buy it on amazon

Men with cystic fibrosis often have a missing or obstructed vas deferens.

Stress may interfere with certain hormones needed to produce sperm. Sperm count can be affected by excessive or prolonged emotional stress. Infertility, itself, can produce additional stress.

Deficiencies in nutrients such as vitamin C, selenium, zinc and folic acid can contribute to infertility.

It is important to note that fat tissue is rich in hormone converting enzymes and thus increased body mass may be associated with fertility problems in men by converting male hormones into inactive or estrogenic compounds.

Cancer and its treatment

Both radiation and chemotherapy treatment for cancer can impair sperm production, sometimes severely. Removal of one or both testicles due to cancer also will affect male fertility. Banking of frozen sperm is always a recommendation prior to initiating chemotherapy.

Alcohol and drugs. Alcohol or recreational drug dependency can be associated with poor health and reduced fertility. The use of cocaine or marijuana can temporarily reduce the number and quality of sperm. Tobacco use can lower sperm count. Anabolic steroids can cause the testicles to shrink and sperm production to decrease. The use of certain prescription drugs can also contribute to infertility. Dr. Toth was the first to describe morphological changes caused by the drug Azulfidine, used for the treatment of ulcerative colitis.

Infection may temporarily affect sperm motility. Repeated bouts of sexually transmitted diseases (STDs), such as Chlamydia and gonorrhea, are most often associated with male infertility. These infections can cause scarring and blockage of sperm passage. If mumps, a viral infection, usually affecting young children, occurs after puberty, inflammation of the testicles can impair sperm production. Inflammation of the prostate (prostatitis), urethra or epididymis also can alter sperm motility and the fertilizing capacity of sperms.

This occurs when semen enters the bladder during orgasm rather than being ejaculated. Various conditions can cause retrograde ejaculation, including diabetes, bladder, prostate or urethral infections or surgery, and the use of certain medications.

Blockage of epididymis or ejaculatory ducts

Some men are born with a blockage of the epididymis or ejaculatory ducts. Some men congenitally lack the tube that carries sperm (vas deferens) from the testes to the urethra. Both conditions can be caused by infection.

Antibodies that target sperm and weaken or disable them can occur after vasectomy, a surgical ligation of the vas deferens for male sterilization. Even after a successful reversal, these antibodies can compromise a man’s fertility. Anti-sperm antibodies can form after any type of genital tract infection.

Many years before our microbiology laboratory was functioning in full capacity we already noticed the development of certain pelvic and menstrual flow changes in the females when exposed to seminal fluid with active spermatozoa that were compatible with slowly advancing PID. Additional observations showing that PID never developed in the female partners in marital unions where that males were azospermic and that the chance for PID for developing was markedly reduced with a severely oligospermic male as companion made us suspect the spermatozoa as potential vehicles for bacteria within the female genital tract. Males with very high sperm count and active, bacterial infections in the genital tract would cause the development of PID after a short sexual exchange. As our microbiology isolation technics improved during the years, the linear correlation between the amount of bacteria and the number of spermatozoa present in the seminal fluid and the chance for the development of PID in the female became obvious. By far the most significant pathogen as of today is Chlamydia trachomatis.

Over the last thirty years antibiotic therapy gradually replaced all other therapy modalities in the management of infertility in our laboratory. Initially, orally given single antibiotic regimens were used on an empirical ground and semen quality changes were registered. The empirical antibiotic therapy courses yielded two very important observations.  First, poor motility of the spermatozoa best responded to antibiotic therapy and promptly replaced hormone therapies such as Clomid, Perganol, or HCG. Today, we can state it categorically that save for exceedingly rare pituitary or gonadal complex endocrine conditions, hormonal management of poor motility has no place in treating the male factor.  Secondly, it is now almost three decades since we are aware of labile morphological groups in the semenogram. As classified by Dr. MacLeod’s classic description as small, tapering, and a large percentage of the so-called amorphous forms, actually represent cell abnormalities caused by environmental factors. The majority of these agents are infections acquired both vertically and horizontally. In a person the morphological distribution of the sperm cells in subsequent semen analyses can shift toward the oval forms following antibiotic therapy conclusively proving that infectious agents can alter sperm morphology within the testes.

To prove that spermatozoa indeed actively play a role in delivering microbes up to the higher female genital tract, the following experiment was designed. Micro-hematocrit capillary tubes ware filled with ovulatory cervical mucous and one end of these tubes was immersed in a sperm solution the bacteria content of which was known to us. The capillary tube was on a heated microscope stage under the objective lens in such fashion that the observer could follow the spermatozoa migration within the mucous. After approximately half an hour, spermatozoa have traversed the entire length of the capillary tube arriving to the opposite end. One-third of this end of the capillary tube was then broken off and bacteria cultures were performed on the mucous. The bacteria identified were identical to those bacteria isolated from the original semen. This experiment proved that bacteria can attach to spermatozoa at the head, mid-piece, and tail section, and not unlike hitch hikers travel through a fertile cervical mucous and deposit these bacteria to the higher female structures. The following photomicrograph depicts one spermatozoon with over a dozen bacteria attached to the head, mid-piece, and tail section. 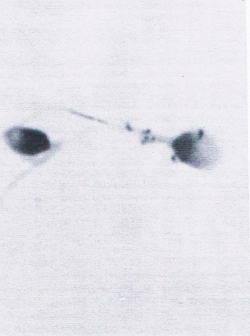 The previous experiment helped shed light on observed differences in the frequency of PID and different birth controls used. Birth control methods, that leave the cervical canal exposed will have higher risk of association with PID while the highest safety mark will be awarded to those mostly barrier type birth control methods. Among barrier type methods only the condom, if it is used properly, protects the female tract entirely from exposure to the seminal fluid and is the only safe birth control method that can separate the male and female bacterium flora. As far as unexpected pregnancies, with decreasing frequency, the order is: diaphragm, condom and the pill.

Birth control pill use tends to reduce the risk of PID. The sticky cervical mucous that the birth control pill creates prevents sperm migration explaining the reduced incidence of PID. Similarly, barrier type birth control methods and using the pill prevents carcinogens carried by spermatozoa from reaching the ovaries thus lowering the risk for ovarian cancer. Women on birth control pills will have reduced quantities of sperm reaching the higher tract. If, however sexual intercourse is practiced during the days of menstruation the blood will allow sperm migration and that cancels out the pill’s protective effect. It is wise to use the birth control pill in conjunction with another type of birth control method such as a diaphragm. The diaphragm by itself allows the male seminal fluid to reach the vaginal walls and to reach the external major glandular structures and get into the urethra. Thus, a properly used diaphragm will shield the cervix and if the spermicidal jelly is properly applied sperm migration through the cervical canal will not occur. Unfortunately, diaphragm, due to its cumbersome use is associated wit a high accidental pregnancy rate.

Four different types of mechanical birth controls are in use: The most common is the male condom. If properly used, the bast barrier type birth control method. Unfortunately it is often incorrectly used. Putting it on in the last few minutes before ejaculation will allow the secretion of the accessory urethral glands to reach the vagina causing transfer of infection. Often active spermatozoa can be found in the pre ejaculatory  fluid leading to high pregnancy failure rate.
The female diaphragm is more cumbersome then the male condom. Improper fitting, not properly used spermicidal gel increase the chance for failure. Diaphragm users are exposed to vaginal infections and seminal fluid bacteria will find their way into the urethra, bladder and into the major labial glands.
The cervical cap is a less often used device. It needs skill and often physician's assistance to place it over the cervix . If properly fitted functions like the diaphragm. If left in place for number of days it will predispose to local infections.

Female diaphragm is probably the least often used device. it serves two functions. The vaginal part functions like the male condom and supposed to catch the sperms serving as birth control. The outside, perineal part is covering the vulva and urethral openings and aims to protect those from infections. If properly used it could reduce the chance of infection and empowers the woman with reliable infection control.

Similarly, the effects of horizontally transmitted infections is obscured by the pill. While maintaining a regular, monthly menstrual pattern a progressing ovarian or endometrial infection remains undiagnosed. The extent of the infectious damage becomes apparent only when the pill is discontinued in preparation for a pregnancy. I recommend taking time off from the pill in four months intervals. If the spontaneous period shows up normal, I have no objection renewing the script.
The pill can be used as hormone replacement therapy in post menopausal women if monthly bleeding is desired. Due to their relatively low estrogen content, bone density studies cannot be omitted.
I oppose using the pill for the management of PCO or PMS or prescribing it to alleviate menstrual cramps or excessive mood swings. Since birth control pills are hormone products one cannot ignore published data on association of hormone replacement therapy and increased cancer risk.

The last and the least recommended birth control method available is the intrauterine device and despite the fact that it is the most convenient, and a carefree device, the chance for intrauterine infection is always present. It is not the birth control of choice for nulliparous women who eventually planning to have children. The older, purely mechanical devices left the cervical mucous unaltered during ovulation, thus the spermatozoa had free access to the higher structures and there was no protection against pelvic infection. The newer devices have time-release progesterone in their stem and the local progesterone creating a milieu in the uterus unsuitable for embryo implantation. The negative effect of progesterone on the cervical mucous will create a cervical barrier against spermatozoa. The new IUD’s work both as barrier and hormonal birth control devices helping to reduce the risk of PID.