Read and buy our books online

Read Online  Buy it on amazon

The role of T Mycoplasma (Ureaplasma urealyticum) in reproductive failure is controversial. Since mycoplasma was first isolated from a genital-tract abscess, an association between mycoplasma and various genital-tract conditions , reproductive failure, relative or absolute infertility has been suggested. Several investigators have shown that the relative frequency of T-mycoplasma colonization in the genital tract depends on the sexual experiences of the subject and that infertile couples tend to have higher colonization rates. Several claims were made previously that by eradicating the organism, doxycycline improved fertility and resulted in higher pregnancy rates in a group of couples with unexplained infertility. These findings were subsequently refuted by several other investigators who did not find a close correlation between doxycycline therapy and fertility.
...

One-hundred sixty- one men with T-mycoplasma infection in their seminal fluid were treated, along with their wives

Four weeks with doxycycline, (100 mg twice a day) was given to both husband and wife. 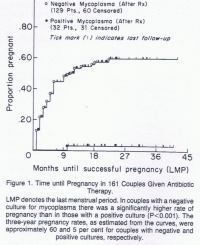